If there’s one thing we learned from the recently concluded Sankalp Africa Summit, it is that the world’s efforts towards achieving the Sustainable Development Goals have to be led by women.

There is no denying that reality is still grim for many women across the globe in terms of financial inclusion, access to healthcare, and education. But the silver lining in such times are women whose life stories have become a source of inspiration and empowerment to many.

Here are three women who spoke at Sankalp, sharing their learnings and vision for the future:

A writer, editor, broadcaster, and literary critic, she has also written drama for BBC radio and the stage. Margaret has been a long-time campaigner for diversity in publishing. At Sankalp Africa Summit 2021, Margaret presented her book ‘New Daughters of Africa’. The book brings together more than 200 writers from more than 50 countries across the world, giving voice to women of African descent.

Watch her conversation with some of the formidable new daughters of Africa here.

Josina Machel: Josina is a long-standing human rights defender. As the daughter of Graça and Samora Machel, and stepdaughter of Nelson Mandela, she was born into a legacy of activism and is fiercely passionate in her life’s calling to advance women’s rights.

In October 2015, Josina was physically assaulted by her then-partner which led to her tragically losing sight in one eye. As a result of this horrific experience, her activism took on new meaning and she felt propelled to vigorously fight for the rights of abused women, realizing that there are many like her who have faced brutality without being able to speak out. As a survivor of domestic violence, she is turning her personal trauma into purpose. Through the Kuhluka Movement, Ms. Machel is helping to accelerate social change in communities across Africa, entrench a culture of rights and respect for survivors of violence.

Watch her speak at Sankalp’s session on Africa’s Women Rising.

Wanjira Mathai: Wanjira is a Kenyan environmentalist and activist. She is Vice President and Regional Director for Africa at the World Resources Institute, based in Nairobi, Kenya. An inspiring leader, Wanjira has over 20 years of experience advocating for social and environmental change on both local and international platforms. Over the years, Wanjira has also served important strategic and advocacy roles raising the prominence and visibility of global issues such as climate change, youth leadership, sustainable energy, and landscape restoration, at Women Entrepreneurs in Renewables (wPOWER), the Wangari Maathai Foundation (WMF), and the Green Belt Movement (GBM) the organization her mother, Wangari Maathai (2004 Nobel Peace Prize Laureate) founded in 1977.

Watch Wanjira’s address during a session on Answering Africa’s SOS Call for a Climate Resilient Future.

5 Reasons why you should Invest in Kenya 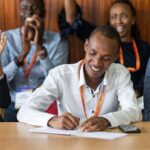 Time to move from donor-centric to entrepreneur-centric ecosystems